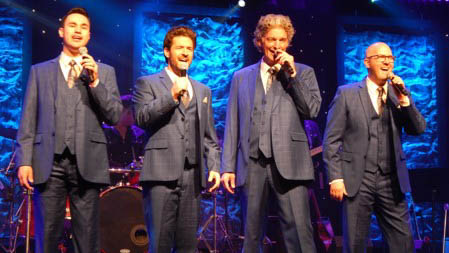 My love of gospel music is well known and when one of my favorite quartets gets together to sing some gospel, I’m gonna be there. Yesterday [Apr. 11] was the time of the week that all this happened at the Grand Country Music Hall and we were there.  Each Thursday, the New South quartet sings some of the best known southern gospel and hymns there are and I really enjoy their singing.

The New South quartet is made up of four talented guys who’ve been singing these songs for quite awhile now.   There’s the bass man Mark McCauley, tenor Luke Menard, baritone Jon Drockelman and lead David Ragan.   They came on stage singing “Oh What A Happy Day,” “I Would Crawl All The Way To The River” and “I’ll Fly Away.”

Then they bring on Jackie Brown who can belt out those gospel songs like “Let’s All Go Down To The River,” “ I Go To The Rock” and “Who Am I.”  I love to hear Jackie sing.

Of course it would not be the great show it is without Jim Dandy and all his jokes.  But the thing I admire most about the real person, Jamie Haage, is his talent for singing and playing any musical instrument thrown his way.   And, most amazing, is that he plays all these instruments by “ear.” His first song of the afternoon was that old song “God’s Gonna Do The Same For You And Me.”

Behind all this singing is the Grand Band with Music Director Tracy Heaston on piano and keyboard. I’ve known Tracy since our days back in Eureka Springs and he was a great pianist then and has only gotten better.   They turn him loose on old favorites “I Saw The Light” and “You’ll Never Walk Alone.

Tracy is joined on stage by Wayne Massengale on fiddle and acoustic guitar, Larry Allred on bass guitar, Rob Blackburn on drums, Chad Cathell on lead and acoustic guitar and Gene Mulvaney on steel guitar. No wonder why they were chosen “Band Of The Year.”

David Ragan does a good job on that old Jack Hess song “More Excuses,” which tells about some of the excuses we use to skip church. Funny song.

One of my favorite parts of the show is when the group does their old radio and convention medley including New South’s “Turn Your Radio On,” Tracy playing “Happy People,” “Peace In The Valley” sung by Jamie and a group song “Looking For A City” where Mark attempts to sing that high tenor part.  You’ll just have to go see how he does it.

They play a video tribute to the Foggy River Boys in the early years and wind up with New South singing “Satisfied.”  Jamie sang a terrific song which I was not familiar with titled “For What Earthly Reason” and the cast ends the show as always with a patriotic number “Statue of Liberty.

Catch New South Gospel every Thursday afternoon at 3 p.m. at the Grand Country Music Hall. Call 417-335-2484 for information and tickets.