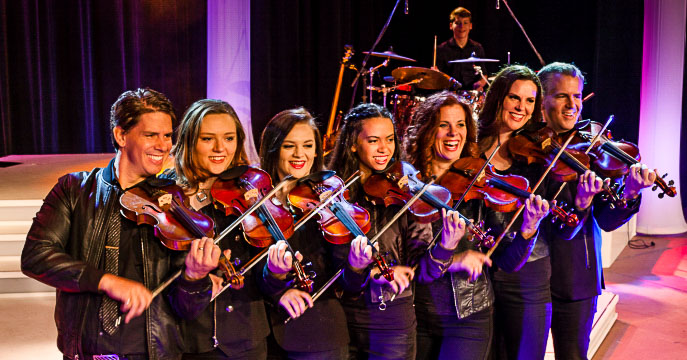 The Dutton family, stars of one of Branson’s most popular shows The Duttons, will launch a weekly TV series, The Duttons Through the Years, on Friday March 9. The show will be on RFD-TV and will feature The Duttons performing at their theater in Branson, Missouri along with highlights from three decades of exciting and entertaining performances throughout the world,” said Judith Dutton, the Assistant Manager for the Dutton Complex and one of the featured performers in the show.

The series chronicles the more than 30 year journey of The Duttons, from a young family having fun together in their spare time to one of the country’s most beloved entertainment groups. Dean Dutton, a tenured professor of economics at the time, and his wife Sheila, never meant to have a performing family. Their desire was to instill discipline in their children through consistent music practice on violins, while learning the joy of producing music. They succeeded so well that the their children’s love of music and family relationships ended up changing their life forever.

Dean took early retirement and dusted off his old guitar; with the encouragement of her children, Sheila learned the Bass; and the family went on the road performing up to 200 dates a years all around the world, and settled in Branson in 1997.

In 1999, after viewing The Duttons’ first national television special Music in Your Heart, Boxcar Willie asked Dean and Sheila Dutton to take over his theater in Branson and the “the rest is history.” Almost 20 years later, they are still one of the most popular shows in Branson and their Family Theater complex, comprised of “The Dutton Family Theater,” the “Dutton Inn,” and “Abby‘s Tourist Trap,” are popular Branson destinations.

In 2006, They expanded their entertainment enterprise and selected the Phoenix, Arizona Valley as a winter destination for their show. The Dutton Theater Mesa Arizona welcomes guests from all over the country mid-December through March, returning to Branson in April.

They never set out to amass a large catalogue of musical production video, but TV stations and networks around the world were eager to get footage of them and book appearances. Starting in 1988 with RAI 3 Television out of Rome, Italy, Europe’s largest television network, and continuing with appearances on TF 1 out of Paris, France, and regional television throughout Europe, The Duttons continue to be featured on many of the world’s most prestigious television networks. Along with the above, they have appeared on Chinese National Television, Japanese Television, five national television specials in the U.S., and appeared as finalists on NBC’s prime time hit program, America’s Got Talent.”

The airing of The Duttons Through the Years, is their fourth program on RFD-TV, and The Duttons couldn’t be more thrilled with that partnership. The series highlights the musical genres the Duttons love most country, bluegrass, rock ‘n’ roll, classical, and gospel. Add to that the amazing variety of vocals, instruments, dancing, and comedy, and one soon sees why audiences love The Duttons and their show is so popular.. The unusual versatility of each of the main performers puts The Duttons in a category all their own. Three generations on stage at once, tugs at the heartstrings of audiences everywhere.

Additionally, the breathtaking scenery of the on- location music videos is one of the crown jewels of this series. The Duttons Through the Years will air on Friday evenings at 7:30 PM Eastern Time on RFD-TV with each episode will re-airing on Tuesday afternoons at 4:00 PM Eastern Time. The pilot (with special guest star, Grammy Award Winner, Billy Dean) will debut on Friday March 9, 2018. The Duttons start their 2018 Branson season on Monday, April 9.