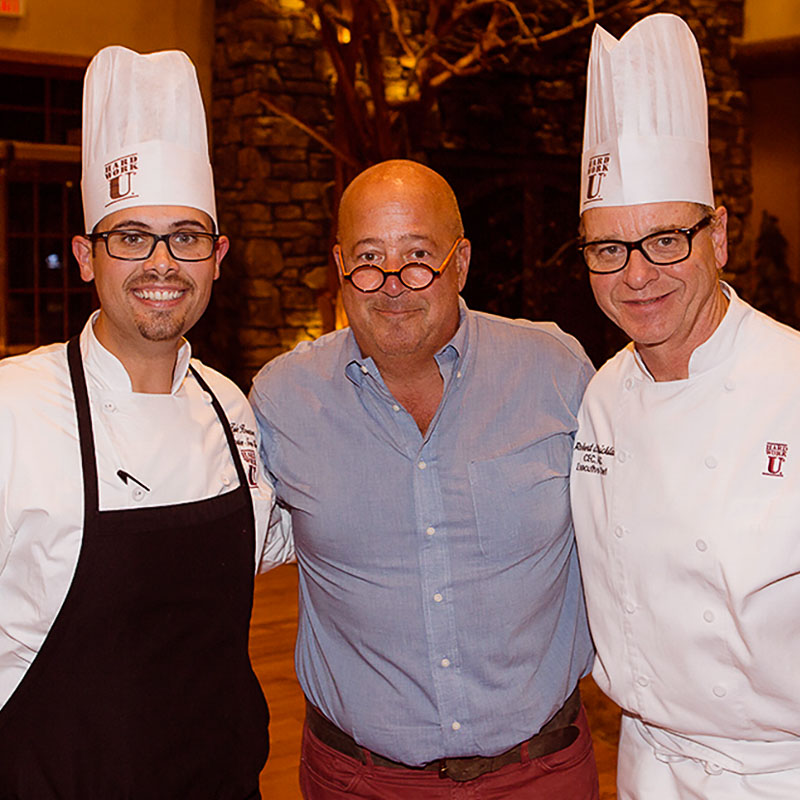 College of the Ozarks hosted Andrew Zimmern — TV personality, chef, writer, and teacher — at The Keeter Center’s Dobyns Dining Room restaurant in 2017 for his new show, “The Zimmern List.”

The episode, which highlighted several area restaurants and popular locations in the Branson area, premiered on Travel Chanel on Tuesday, April 10, 2018. While the show aired this spring, viewers have another opportunity to watch the episode on June 20, 2018. Those interested may view an exclusive clip not seen in the show at the following link: https://www.travelchannel.com/shows/the-zimmern-list/episodes/branson.

“Off camera, Andrew seemed highly impressed with both The Keeter Center and the College of the Ozarks in general,” said Robert Stricklin, executive chef at The Keeter Center. “He gave hope to our young people that we’re doing the right thing. He wishes more colleges would operate the way we do.”

Before visiting The Keeter Center, representatives of Zimmern’s production crew visited the College and experienced the campus gardens, Edwards Mill, and the Fruitcake & Jelly Kitchen. The crew’s final stop was The Keeter Center, where they spent more than two hours filming background scenes for the new television program.

Zimmern is the creator, executive producer, and host of the “Bizarre Foods” franchise on Travel Channel. His love for food and passion for helping others made him a fast friend of the College. He talked with Stricklin about the mission of the C of O and the amazing stories of struggle and success represented by the College of the Ozarks students who work in the Dobyns Dining Room kitchen.

“Andrew wanted to see the kitchen right away,” Stricklin said. “I explained to him that the students on the hot line when he came through were representing many different majors – some English, some history, some business, some education. We have students in our culinary arts program, but it takes more than 80 students to work in the kitchen each year and more than 300 students to make The Keeter Center operate. The expression on his face as he ‘got it’ was priceless.”

Zimmern ordered pork pomodoro and the special for the night, sautéed chicken and gnocchi. The pork pomodoro features medallions of campus-raised pork, basted with pesto, garden fresh tomatoes, and roasted garlic. It is served on campus cornmeal polenta. The gnocchi, which was made fresh that evening, was prepared with artichoke, red pepper, and sundried tomato cream sauce.

“I’m excited by the American spirit that I felt in that dining room with hard-working young people that want to be in the hospitality business. That excites me,” Zimmern said. “The best show in town is in that kitchen.”

About College of the Ozarks

College of the Ozarks is a private, Christian, liberal arts college, located in Point Lookout, Missouri, on a 1,000-acre campus. Christian values, hard work, and financial responsibility comprise the fundamental building blocks of the “Hard Work U.” experience. The College earns numerous accolades yearly, including No. 1 Best Value Regional College in the Midwest and No. 1 Most Innovative School in the Midwest by U.S. News & World Report for 2018. To achieve its vision, the College pursues academic, vocational, Christian, patriotic, and cultural goals. These goals are mirrored in School of the Ozarks, a laboratory school that completes the K-college model.

The Keeter Center — the College’s award-winning lodge, restaurant, and conference facility — was ranked a Top Small Hotel in the U.S. by TripAdvisor for 2018. It features historic lodging, fine dining, and meeting rooms. With more than 350 student workers, it is the largest work station on campus. Follow College of the Ozarks at www.facebook.com/collegeoftheozarks or on Twitter @CofOHardWorkU.