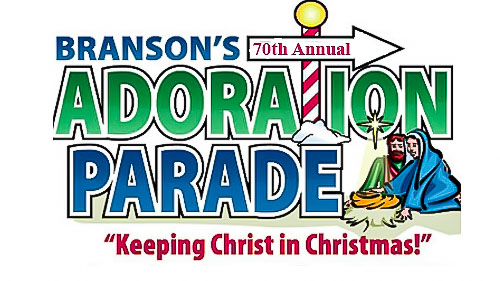 On Sunday, December 2 at 5:30 PM, the Branson community will gather together to celebrate the true meaning of the Christmas season with its 70th Annual Adoration Parade. The parade’s theme, as it has been from its inception, is “keeping Christ in Christmas.” The evening starts with the lighting of the giant 30-foot Nativity Scene atop Mt. Branson overlooking Lake Taneycomo, Branson Landing, and Historic Downtown Branson. It’s immediately followed by a night “light parade” with dozens of bands, floats and walking units participating. The colorful and festive parade is themed to “keeping Christ in Christmas,” with no commercial advertising permitted on the floats.

“The Branson Police urge extreme caution while driving downtown due to the high volume of pedestrian traffic…Drivers should expect traffic delays and some road closures downtown beginning at 3:30 p.m.; all roads along the parade route will be closed by 5:00 pm, access to the Branson Landing will be available during the parade at the far North and South ends, however, there will be no through traffic on Branson Landing Blvd; and that .police will assist with traffic direction at the conclusion of the parade but drivers should expect heavy, slow-moving traffic.”

It is anticipated that parking space will be at a premium. Parade goers should plan accordingly. Two of the most convenient places to view the parade will be along Branson Landing Boulevard and Commercial Street in historic downtown Branson.