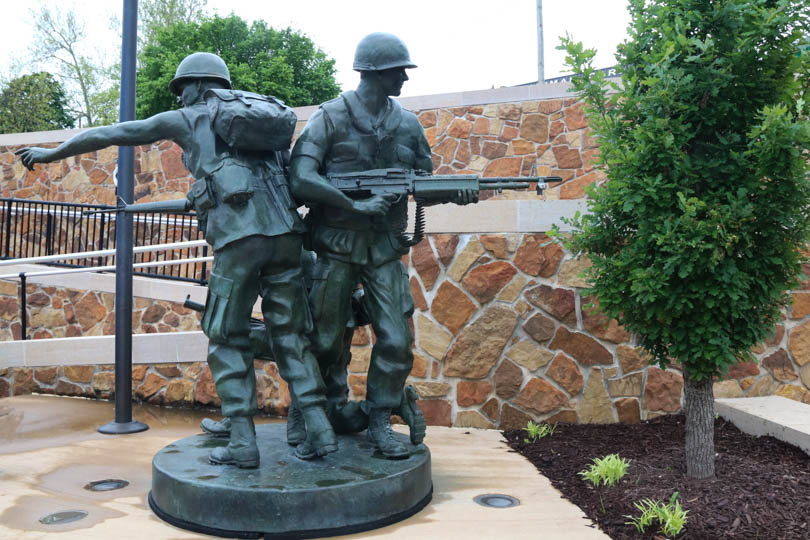 At its May 11, 2021 meeting, the Branson Board of Aldermen (Board) considered a “Resolution” authorizing the sale of three bronze Armed Services statues owned by the city. The statues, “Storming the Beach,” a 50 man statue, “Stay Low,” a 12 man statue, and “Vietnam Trio,” a three-man statue, were sculpted by Fred Hoppe for display in the Branson Veteran’s Memorial Museum.

When financial challenges developed, Cornerstone Bank became the owner of the statues. The city of Branson purchased the three statues from Cornerstone for $1,000,000.00 in 2015., They remained in storage until eventually being put on display at various locations throughout the city. “Storming the Beach,” the 50 man statue is currently on temporary display on Highway 76 at the “Veterans Memorial Museum,” under an agreement with the city of Branson Branson. The “Stay Low” statue is currently on display in the Branson Veterans Memorial Garden at the intersection of Highway 76 and Roark Valley Road, and the “Vietnam Trio” is on display at Liberty Plaza in historic downtown Branson.

During the Staff Report on the Resolution, it was brought to the attention of the Board that there is a $512,000 “internal loan” against the statues. It is for five years at 1% interest.

In response to comments and questions by Mayor Milton, Rouch acknowledged that the statues were purchased for cash, they were not an eligible Tourism Tax item,” and that the funds to pay for them really should have come out of the General Fund. She said the internal loan was crafted by Gilmore and Bell and approved by the city’s auditors.

Alderman Clay Cooper summed up his feelings about the diversion of a million dollars from the Tourism Tax Fund to the General Fund in one word, “WOW.” City Administrator Stan Dobbins said, “Don’t look at me I had nothing to do with it. I will say this, I believe firmly that there are times when you look at the Aldermen from my position and say, ‘No don’t do this.’ That all I have to say.” Administrator Dobbins was Assistant Chief of Police and not the City Administrator when the fund diversion was made.

Alderman Cooper asked Rouch what she thought the statues would sell for. She said, “The last time we went out for bid on them it was $16,000.” Cooper said, “Oh my God, that was a great investment!”

After discussing the need for possibly changing the wording in the ordinance, the Board, by unanimous vote, rejected the Resolution.