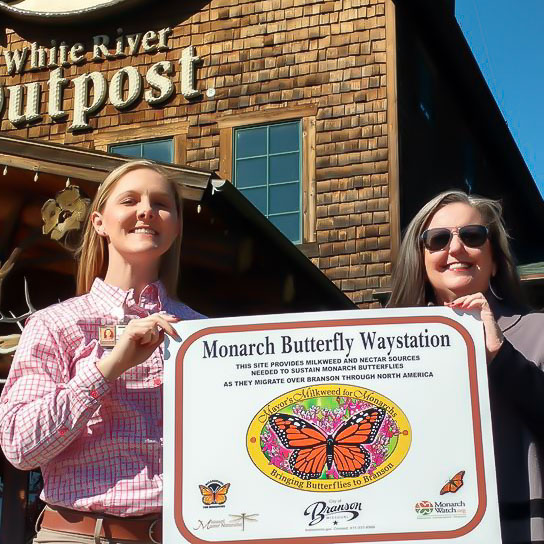 Ninety percent of all Monarch butterflies have disappeared in the last decade, but Bass Pro Shops is doing something to change that. The City of Branson recently certified the newest “Mayors Monarch Garden,” at Bass Pro Shops White River Outpost at Branson Landing.

“Bass Pro Shops is proud to join the City of Branson in restoring habitat for Monarch butterflies and other pollinators,” said Martin MacDonald, Bass Pro Shops Director of Conservation. “Inspired by the visionary conservation leadership of our founder and CEO Johnny Morris, we are committed to protecting wildlife and habitat alongside great local and national partner organizations like the City of Branson.”

The new landscaping now includes two types of native Missouri milkweed, essential for Monarch reproduction. Each Monarch waystation garden must include a minimum of five Missouri milkweed plants, plus five nectar plants needed to provide energy for the migration.
Mayor Karen Best has been a leader in this national effort, signing on the City of Branson as an official “Mayors for Monarchs” city in October 2016. There are now over 337 Monarch cities, stretching from southern Texas to Canada. These cities, including Branson, pledged action items which will help provide habitat for the dwindling populations of the iconic Monarch butterfly.
City of Branson committed to ten action items, including a public communication effort to encourage citizens to plant monarch gardens in local neighborhoods, and creation of a demonstration garden at the Branson Recycle Center. Since last year, the city has helped distribute 900 pollinator seed packets donated to the city by National Fish and Wildlife Federation & Monsanto, and several hundred milkweed plants donated by the Missouri Department of Conservation.

“This is truly a community effort,” said Mayor Karen Best. “Branson lies in the very center of the Monarch migration flyway so our actions make a difference. We are a green and sustainable city with visitors, residents and businesses who appreciate the natural beauty of our region, and are willing to include habitat for Monarch butterflies. We can all make small changes to prevent the Monarch butterfly from disappearing completely in our lifetime.”

Several local businesses have included pollinator habitat in their landscaping, and many homeowners are doing the same. The city has incorporated Monarch habitat within its landscaping at the Branson Convention Center, Branson Lakeside RV Park, Fire Station Two, Lakeside Forest, Branson Recycle Center, a Historic Downtown planter, and other city facilities. A map of all registered Monarch gardens is available on the city website. Signage is available free of charge to city residents and businesses. Signage for gardens outside the city limits can be purchased for a small fee at Wild Birds Unlimited Branson.

Bass Pro Shops is known as a national leader working to ensure the health of fish and wildlife resources for generations to come. The company’s efforts have restored millions of acres of habitat, healthy rivers, lakes and streams across North America, with programs that have significantly increased wildlife populations for hundreds of native species.
For more information see bransonmo.gov, or monarchwatch.org