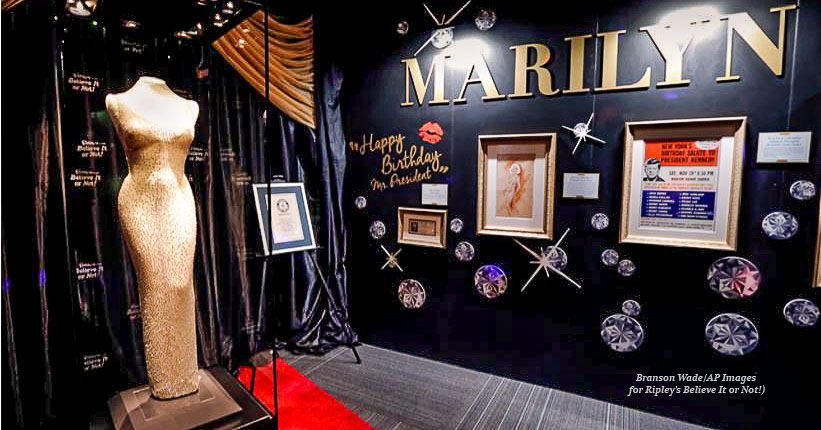 “Believe It or Not” for just a short time, you can see the dress made famous by Marilyn Monroe when she sang her sultry, iconic rendition of “Happy Birthday” to President John F. Kennedy, at his 45th birthday gala, in Madison Square Garden. It, and other Marilyn Monroe memorabilia, will be on display at Ripley’s Believe It or Not! on West Highway 76 in Branson, for a limited engagement, from April 14 through June 10, 2018.

Ripley’s Believe It or Not! established a brand new Guinness World Records record for the most expensive dress ever sold at auction after they purchased it from Julien’s Auctions for a whopping $4.8 million. When auction fees are factored in, the cost of the dress is over $5 million which, Ripley’s says, “Makes it the most expensive dress in the world.” Edward Meyer, VP of Exhibits & Archives for Ripley’s, who has been acquiring items for them for over 39 years and placed the winning bid on the dress, said, “This is the most famous item of clothing in twentieth-century culture.”

How did it get that distinction? On May 19, 1962, a gala Democratic fund raising event, celebrating, JFK’s 45th birthday, was held at Madison Square Garden in New York City. It was attended by more than 15,000 people including numerous celebrities with Peter Lawford acting as Master of Ceremonies for most of the evening.

One of the evenings highlights was an appearance by Marilyn Monroe, who had flown in from the set of the movie she was working on, Something’s Got to Give, specifically for the event. The anticipation of her appearance had been building as Lawford, playing on her reputation for being late, introduced her a couple of times throughout the evening before the actual introduction, when he introduced her, as “The late Marilyn Monroe,” and she actually appeared.

Before departing the stage, Lawford helped her remove her jacket, giving the audience its first full look at her $12,000 Jean Louis dress which had been exclusively designed for her. The sheer, nude colored, dress was covered with over 2,500 rhinestones and fit so tight it appeared as if it had to have been “sewed on.” The combination of the magnificent dress and the fact that it appeared as if she wore nothing under it had the crowd gasping and cheering.

Monroe waited for the cheering to die down, then started singing the traditional version of “Happy Birthday,” substituting “Mr. President” for the name. She followed that by singing a short verse using the music from “Thanks for the Memory” and substituting the following lyrics about Kennedy which she had written for the occasion:

Thanks, Mr. President
For all the things you’ve done
The battles that you’ve won
The way you deal with U.S. Steel
And our problems by the ton
We thank you so much

Sung in a very sultry manner, it took on even more meaning because of the rumors that she and Kennedy were having an affair and the fact that Jackie Kennedy was not there. The combination of the event, the dress, the way she sang the song, and the two major principals resulted in a iconic moment forever recorded in history.

After her performance, Kennedy came on stage and, seemingly referring to her skintight dress, image as a sex symbol, and the sultry performance of the song said, in a joking manner, “I can now retire from politics after having had ‘Happy Birthday’ sung to me in such a sweet, wholesome way.” It was a light moment with no hint of the sadness the future held. Monroe never finished the picture she was working on, dying of an apparent overdose less than three months later. President John F. Kennedy was assassinated 18 months later.

For more information and the latest news, please click here to visit the Branson Ripley’s Believe It or Not! site or call 417-337-5300.