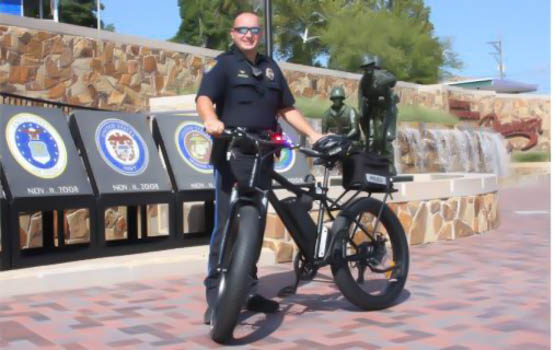 The Branson Police Department has taken delivery of a new bicycle for patrol officers to use
across the City. Built by Enabled Enterprises, this seven speed bicycle has some very unique features.
Beyond its seven gear speeds powered by the patrol officer, it also has a unique pedal assist feature
from a battery powered motor.

“Several years ago we started a bike unit that primarily patrolled downtown Branson on
standard road bikes,” stated Patrol Officer Caleb Teig. “With the best of intentions, we soon learned
a full shift on the bike was a challenge physically in relationship to covering a large area with a lot of
steep hills.” The bike has a built in motor that operates at various power levels to assist officers climb
hills, rough terrain, and on long rides. The motor can operate in five different modes from no pedal
support to fully motorized for use on streets and trails. The patrol officers also will have increased
safety from the large four inch tires plus an emergency light and siren package designed to warn nearby
pedestrians as the patrol officers navigate through crowds. The bicycle features can operate for 10-12
hours on the battery power with a top speed of 25-30 mph.

One of the most unique features of this particular bicycle is the manufacturer. “Enabled
Enterprises have developed a line of products including this bike that is assembled, distributed, and
sold by veterans,” stated Teig. Enabled Enterprises was founded by veterans with the objective of
supporting their fellow comrades-in-arms with issues they face in post military life.

The police department plans on assigning four patrol officers to be trained and equipped to use
the new bike as weather conditions and staffing allows. “With the new pedal assist and larger format
tires, we will be able to better patrol downtown, city parks and trails, neighborhoods, and area
business parking lots,” stated Teig. The bike provides a lot smaller profile compared to a patrol car.
“This will allow us to patrol areas such as parking lots to help prevent theft from vehicles, for example.
However, and just as important, is this new bike gives us the opportunity to be more visible, to be able
to stop and talk with folks, and be more proactive rather than reactive in our patrol activities,” added
Tieg.

“We are very proud to partner with this special organization serving our veterans,” stated
Police Chief Stan Dobbins. “Enabled Enterprises knows about Branson and how our community
supports veterans. They know the value this unit will have on our community and in turn are making
a financial donation to our Benefit the Badge program designed to support our hometown hero’s
including law enforcement officers and their families in times of crisis,” added Dobbins.
The police department hopes to have the new bicycle in-service this fall. To learn more about
Enabled Enterprises and the services they provide go to www.enabled.vet.