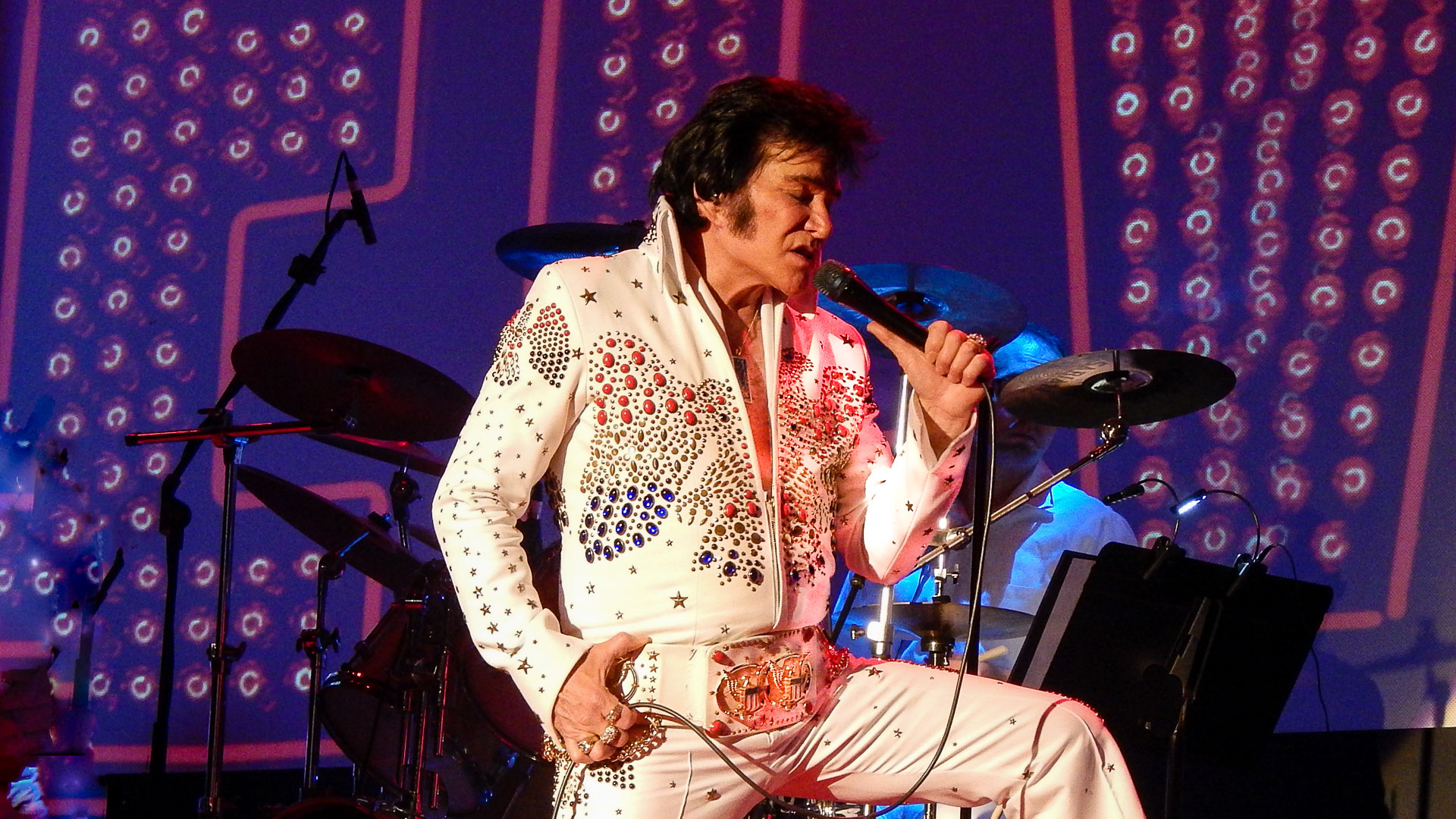 Jerry Presley deserves the money he makes at his God and Country Theatres. I mean, several times a week he puts on that 85 lb. (more or less) Elvis costume with all the rhinestones, sequins and glitter. Then he performs, from one and a half to two hours, without a break and very little talking, one Elvis hit after another…. Helping him is… seven backup singers and the band, who all do a terrific job.

Jerry Presley and Elvis are kin, cousins. That’s why Jerry loves to sing those songs that Elvis did so beautifully all those years ago. During the year Jerry rotates his “Aloha From Hawaii” and “Madison Square Garden” shows and, in November and December, he does his “Christmas With Elvis.”

“Aloha From Hawaii” brings to life the classic 1973 record-breaking Elvis concert “Aloha From Hawaii Via Satellite.”  This is the show we saw last Saturday night in which he sings “C.C. Rider,” “Burnin’ Love,” “Blue Hawaii,” “Aloha,” “Suspicious Minds,” “Love Me Tender,” “All Shook Up,” “Don’t Be Cruel,” “Blue Suede Shoes,” “How Great Thou Art” and a whole lot more Elvis tunes.

Jerry first came to Branson in 1984, opening the first “Elvis Show” in town and stayed here performing for four years. He then toured for several years with The Jordanaires, The Stamps and The Blackwoods. In 2013 he and wife Joanna returned to Branson and in 2017 they purchased the God and Country Theatres.

Jerry has filled the show calendar [of the theatre] with a wide variety of shows and music genres. From Bluegrass to Soul and everything in between, you’re sure to find something you’ll love.   With two theatres in the building there’s great shows going on daily from 10 a.m. to 10 p.m.   As they say, “someone’s always entertaining.”

Other shows in the complex starting up on April 1st include, in addition to Jerry’s shows: Waylon, Willie and the Good Ol’ Boys; Fleetwood Mac Dreaming; The Temptations Motown Legends; Alabama Rolls On; 50 Years of Kenny Rogers; Best of Neil Sedaka, Captain and Tennille and The Carpenters; The Everly Brothers Reminisce; The Statler Brothers Revisited; Three Dog Night Shambala; The Rolling Stones Tribute Jagger; and, Ozark Bluegrass Jubilee.

You can click here for schedules of all the shows and tickets.    God and Country Theatres are located at 1840 W. 76 Country Blvd. next door to Applebee’s.