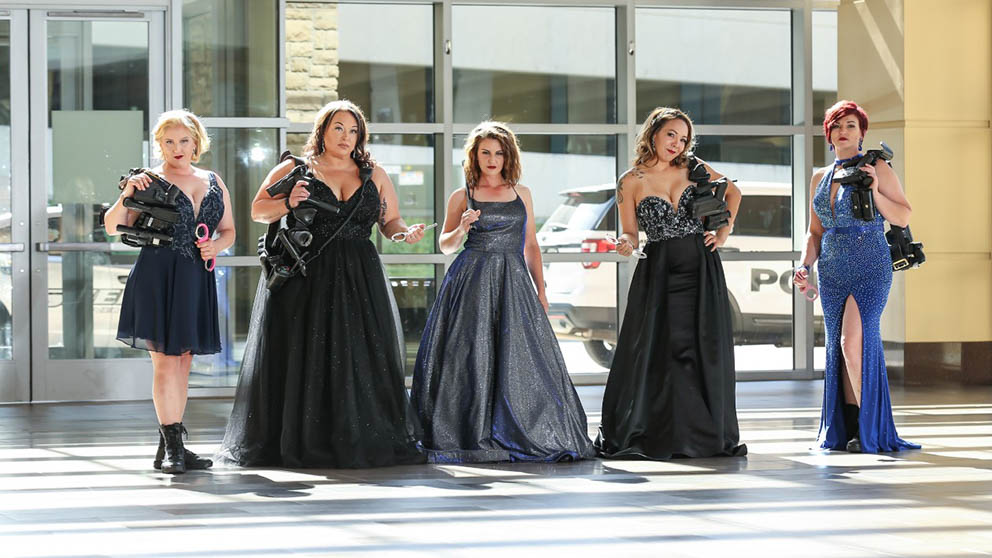 While Halley Schultz, manager at Touch of Class Formals, 4514 North Gretna Road, Branson, was driving to work one day last week, she noticed a sign along the highway promoting “Law Enforcement Week.” It caught her attention.

The sign Fritz saw was referring to the Sixth annual salute to “America’s Hometown Heroes” that began on Sunday and continues through June 15. It is a week when the community and businesses invite active and retired law enforcement personnel, as well as their families, to attend planned free events to pay tribute to and honor them.

After reading the sign, Fritz got an idea. “I wanted to show a different side of our hard-working female officers and have some fun while doing it,” Fritz said. “Every woman deserves to feel beautiful, whether she’s wearing a badge or a gorgeous gown.”

When Fritz told her idea to Touch of Class owners Bob Nichols and Lana Johnson they said, “let’s do it.” “So, that set the wheels in motion for Halley and Lana to come up with the idea to invite area ladies in law enforcement for a special day to get glam and have professional photos done,” Nichols said. “Lana knew I was friends with Sgt. Jennifer Easton of the Branson Police Department. She and I worked together on the Showboat Branson Belle for many years while I was Emceeing and doing comedy in their shows. Jennifer then arranged the other ladies by calling them personally.”

The idea was “a fun day of ‘glamming’ and a photo shoot, so the dresses are loaned to them for the day,” Johnson said. ”Ladies who wear the uniform don’t have the opportunity to get all dressed up like this very often, so we wanted them to have a day to feel beautiful.”

Easton,who said she was excited about the idea, reached out to four other ladies within the law enforcement departments of Branson, Hollister and the Taney Country Sheriff Department. “I’m a parking enforcement officer with Branson Police Department,” said Emilee Norris. “Being a working mother of two boys and a law enforcement officer, it was so great to just be a girl. They made us feel special and beautiful, which isn’t a frequent feeling for me. I spend most of my time trying to just be ‘one of the guys.’”

All five of the ladies agree that the experience of trying on so many “beautiful” dresses and getting “our hair done and our makeup done” for a photoshoot was not only “awesome,” but it gave the female officers a chance to do not something that they typically don’t get to do. “Not only that it gave us a chance to not only bond as officers, but as girls,” Easton said. “I don’t know how we can never thank Touch of Class enough.”

Officer Kat Schmidt of Branson Police Department explained that the day the ladies spent together made her feel “part of a greater sisterhood.” “For the folks at Touch of Class to think of us LEO ladies and to think we might appreciate a day of dressing up, which we so seldom if ever get to do otherwise, makes me feel honored,” Schmidt said.

Viviana Giraldo of the Taney County Sheriff’s Department, agreed that dressing up for the photoshoot was an opportunity to feel “beautiful, like a normal civilian.” “This photoshoot was absolutely fabulous,” Giraldo said. “It made all of us feel beautiful.” Michele Lappin of Hollister Police Department and Giraldo both mentioned that the dresses they wore for the shoot were a nice change from the uniforms they wear for 40 or more hours a week. “It is so nice to dress up once in awhile,” Lappin said. “Being in the career that we are in, most individuals think we are ‘hard’ and can’t have fun like most civilians.”

Each of the “models” thanked Ashley Welter and Crystal from A&Co. Hair Salon in Forysth, Ashley Sanderson who did make-up and Marshall Meadows who donated their time to make the day special for the lady officers. The LEO’s said they are grateful to Touch of Class for thinking of them.

“We are truly grateful as a community for the sacrifices these ladies make to keep us all safe on a daily basis, so we are thrilled to provide a little fun and pampering to say ‘thank you,’” said Johnson. “We are a 20 year-old, local company and always on the lookout for ways to support our community.”